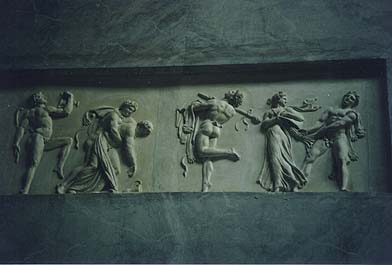 There were initiations which at first imparted only to a few, but then began to spread widely among men and women . To religio were added the pleasures of wine and feasting, to entice more people in. When wine had inflamed them, at night with males mingled with females, young with old, and when all sense of modesty was extinguished, all types of indecency began to occur, since each person had to hand the pleasure to satisfy the cravings to which he was naturally most inclined. Nor was there just one type of vice, the promiscuous sex between freeborn men and women: false witnesses, forged seals, wills and evidence also emerged from the same workshop; also poisonings and domestic killings, of such a sort that sometimes not even the bodies remained for burial. Much was ventured by trickery, more by violence, which was concealed because the voices of those crying for help amid the sex and murderers could never be heard over the wails and the beat of drums and clash of cymbals. . .

Ever since the rites involved the admission of men among the women, and with the added liberation of darkness, absolutely every crime and vice was performed there. The men had more sex with each other than with the women. Anyone who was less prepared for disgrace and slow to commit crimes was offered up as a sacrifice. To consider nothing wrong was the principal tenet of their religio. Men, as if insane, prophesied with wild convulsions of their bodies, married women in the dress of the Bacchants with streaming hair ran down to the Tiber carrying burning torches, which they dipped into the water and brought out still alight (because they contained live sulfur mixed with calcium). People were said to have been carried off by gods; they had been strapped to a machine and snatched from sight to hidden caves. Those seized were people who had refused to join in conspiracy or participate in crimes or engage in sex. It was a great crowd, almost a second state, including some nobles, both male and female. Within the last two years it had been resolved that non one aged over twenty should be initiated; people of this age were sought as being inclined to both erroneous ways and sexual indulgence.