Arena, Baths, Circus, Theater: This model of central Rome in the fourth century CE highlights the major sites for public leisure and entertainment activities, each with its own monumental buildings specially designed to facilitate the activity. Separate pages are devoted to the first three, which had much greater prominence in the life of the ordinary Roman of imperial times than the theater did. Since all wheeled vehicles were banned from city streets during daylight hours, wealthy Romans, men as well as women, were often carried from place to place by their slaves in litters, which resembled a canopied lectus with carrying poles. This reconstructed litter shows the basic design; a cushion would be placed inside and curtains could be drawn around the canopy to protect the master or mistress from prying eyes. Poorer Romans simply walked.

Dining Out: One of the most popular private leisure activities among the upper classes was dinner parties, which could range from intimate parties for nine in a triclinium, to events with music and other forms of entertainment and very elaborate outdoor affairs like the floating banquet pictured in this mosaic (see also detail). At Roman dinner parties, unlike Greek symposia, women and men dined together. The less affluent also had many opportunities for dining out; they could choose from a thermopolium, which was a small pub-like shop selling warmed wines and the ancient equivalent of fast food, or various types of taverns or restaurants (like this attractive establishment in Ostia), some of which were also inns. To experience what a thermopolium was like, stop in for a virtual drink at the Thermopolium of Scintilla in VRoma, either via the web gateway or the anonymous browser.) Some of these eating places also accommodated customers seeking other forms of entertainment, though one could also go to a brothel (lupanar), which often offered customers many small, cell-like rooms which might be painted with images depicting the activities conducted there. Board games, especially gambling with dice, were also popular and often played in these establishments; click here for more information about all forms of Roman board games. 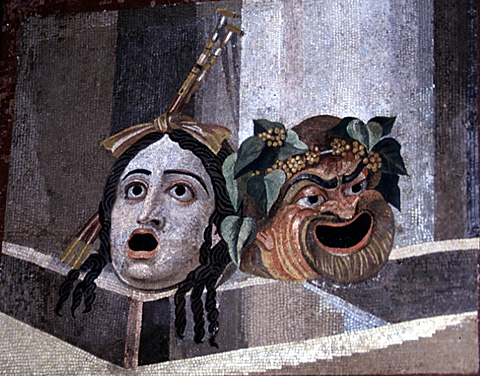 Drama: Early Roman drama in the classical style was greatly influenced by Greek theater; tragedies and especially comedies were particularly popular in the second century BCE, when the great comic playwrights Plautus and Terence were writing and producing their plays (click here for a general introduction to Roman comedy). Classic dramas were written in poetic meters and performed by all-male actors wearing masks, usually during various religious festivals. Originally, all Roman theaters were temporary wooden constructions put up especially for the occasion and dismantled when the festival was over. The first permanent stone theater was erected by Pompey in 55 BCE (it was during a Senate meeting in the portico of this theater that Caesar was assassinated). This computer-generated model of a generic Roman theater illustrates its basic components: semicircular orchestra surrounded by high, tiered stone seats in the auditorium (cavea), with a flat stage where the actors performed in front of a permanent backdrop (scaenae frons) that rose as high as the stands and was attached to them at both sides to form an enclosed building. This model shows the Theater of Marcellus, built by Augustus in honor of his deceased nephew and able to seat about 14,000 spectators. An Odeon was quite similar to a theater in construction but much smaller, generally used for musical performances and literary recitals.

Pantomime: By the end of the Republic, classical drama was largely out of favor. Much more popular were the pantomimes, which also employed masks but no words. These elaborate performances usually involved one male dancer, the pantomimus (“he who imitates all things”) who used gestures and dance to act out a simple story, usually based on a myth that the audience would recognize (in this bone statue, the dancer holds a mask with closed mouth, indicating that he is a pantomime). The dancer was accompanied by a chorus and musicians along with elaborate staging, so in some respects the pantomime resembled a modern ballet. Although a few women might perform in pantomimes, most of the dancers were male, and some became popular celebrities. The ancient physician Galen writes of a case in which he diagnosed that an upper-class woman's illness was due to her infatuation for a dancer (named Pylades after the freedman of Augustus who was one of the founders of the pantomime).

Mime: The mime was another type of performance in theaters that was popular during the imperial period. No masks were worn in mimes, which included dialogue (unlike the pantomimes). Both males and females took part in the performance, though any woman who became an actress automatically lost her claim to respectability. The stories acted out in mimes were loosely constructed around adventure plots, with plenty of bawdy sex and often violence as well.