March, 37 CE: At about 25 years old, Caligula was named Rome's third emperor, the first direct descendant of Augustus to take the throne (click here for a coin on which Caligula emphasizes this relationship). The reign began with good feelings all around, since Caligula declared an amnesty for all Romans imprisoned or exiled under Tiberius, posthumously restored honor to his mother and brothers, and stopped the treason trials, getting rid of the informers in the process. One month after his accession, his grandmother, Antonia, died.

October, 37 CE: Caligula fell seriously ill, with what was described at the time as a “brain fever”; there was great mourning in Rome, and much joy at his recovery. There were a number of freedmen in his close circle who attained considerable influence: Helicon, his chamberlain; Apelles, a tragic actor; and most wealthy and powerful of all, Callistus, a kind of imperial secretary.

38 CE: Early in the year, Caligula forced his father-in-law, Gaius Silanus, and young Gemellus, grandson of Tiberius, to commit suicide by accusing them of treasonable activities. Although the prefect of the Praetorian Guard, Macro, had been influential in helping Caligula secure the throne, the emperor apparently felt that Macro was becoming too powerful. Caligula tricked Macro into believing that he was being made prefect of Egypt and then had him arrested and executed. Later in the year Caligula's favorite sister, Drusilla, died; he had been so close to her that there were rumors of incest. In the manner of the eastern monarchs, Caligula had Drusilla deified; she was the first Roman woman ever officially declared a deity, but her divinity did not survive his reign because he had so egregiously flouted Roman precedent (in contrast, when Claudius had Livia deified, he emphasized her role as “diva Augusta,” wife and mother of emperors). Caligula also minted coins in Drusilla's honor (scroll down on this page to see a coin featuring the three sisters of Caligula).

39 CE: Since the beginning of his reign Caligula had spent lavishly on public shows, games, and displays (sometimes even participating in them himself); in the most extravagant of these, he had hundreds of ships tied together to make a temporary floating bridge so that he could ride across the Bay of Naples on horseback. By 39, the public treasury was near bankruptcy. Therefore, at the beginning of the year Caligula revived the treason trials that had become so unpopular under Tiberius; he also began other methods of raising public money, including the auctioning off of public properties left over from shows. Many of these revealed his strange sense of humor (e.g., at one of these auctions a senator fell asleep and Caligula took each of his nods as bids, selling him 13 gladiators for a huge sum). In the words of historian Michael Grant, “Caligula had an irrepressible, bizarre sense of the ridiculous, deliberately designed to shock, but frequently taken by his alarmed subjects too seriously. Notoriously absurd traditions . . . such as the story that he intended to give a consulship to his favorite horse Incitatus no doubt originated from his continual stream of jokes. Probably he remarked that Incitatus would do the job as well as most of the recent incumbents; and meanwhile he ordered silence in the entire neighborhood, to prevent the horse from being disturbed” (The Twelve Caesars, [New York: Scribner, 1975], 113). Some of his jokes were more sadistic, as when he arranged an oratory competition in which all the losers had to erase their wax tablets with their tongues. All these activities, as Grant points out, “meant that he had far less time available for governing the empire. Caligula, that is to say, became the first emperor to attempt this enormous task as a part-time job” (116).

September, 39 CE: When Caligula was going to Germany to join the legions for a military campaign, he discovered a serious conspiracy against his life, engineered by the army commander Gaetulicus, who apparently intended to replace Caligula with the former husband of Drusilla, M. Aemilius Lepidus (called “Ganymede” in I, Claudius), who was at the time the lover of one of Caligula's other sisters, Agrippina the Younger (called “Agrippinilla” in I, Claudius). Caligula had the two men executed and banished his two sisters, Agrippina and Julia Livilla (called “Lesbia” in I, Claudius). He wintered in Germany, but the campaign there and the proposed invasion of Britain were never carried out; instead the troops engaged in drills and maneuvers, including the collection of sea shells to be displayed in a triumphal parade as the spoils of battle. Caligula became increasingly suspicious, almost paranoid, and his relations with the Senate deteriorated.

40 CE: Caligula announced his self-deification, building temples and erecting statues, even in Rome, to his glorified self. He even ordered that a statue of himself should be placed in the Temple of Jerusalem and the Jews be forced to worship him (the procurator wisely postponed executing this order, and it had not yet been carried out when Caligula was assassinated). This deification was part of Caligula's apparently systematic concept of imperial power, of what he liked to term his “inflexibility” (called by Robert Graves his “immovable rigor”). Was Caligula clinically insane? Was he the evil monster portrayed by Robert Graves? The ancient sources are uniformly hostile, and modern historians differ in their interpretations of his behavior. It is impossible to answer these questions with any certainty. What we can conclude is that he was carried away by the absolute nature of the power that he had inherited from more hard-working and stable emperors. He seemed to be determined to flaunt that power and to strip away all the pretense and euphemisms in which Augustus (and Tiberius, to a lesser extent) had cloaked it. Caligula's bizarre behavior demonstrates what can happen when absolute power is combined with a total lack of responsibility and respect for others (see Garrett Fagan's biography for a balanced assessment of Caligula).

January 21, 41 CE: Caligula was assassinated by members of his own Praetorian Guard, including M. Arrecinus Clemens, co-prefect of the Guard, and Cassius Chaerea, a military tribune of the Guard, in conspiracy with several high-ranking senators, notably Marcus Vinicius, husband of Caligula's exiled sister Julia Livilla. You can visit the underground passageway (cryptoporticus) where he was assassinated by virtually travelling to the Palatine in Region X of VRoma via the web gateway or the anonymous browser. Caligula's wife, Caesonia, and their young daughter were also killed. The Praetorian Guard proclaimed his uncle Claudius the new emperor, and the Senate subsequently ratified this action. Caligula's brief reign also demonstrates the significant role the Praetorian Guard was beginning to play in the Empire. Under Tiberius, the prefect Sejanus had come dangerously close to achieving his goal of succeeding Tiberius as emperor. The subsequent prefect, Macro, had helped Caligula secure his power. Caligula himself was assassinated because he had made a mockery of the military and alienated the leaders of the Guard; it is likely that the senatorial conspiracy would not have succeeded if the Guard had remained loyal to Caligula. Finally, it was the Praetorian Guard that quite openly chose Claudius to succeed Caligula. 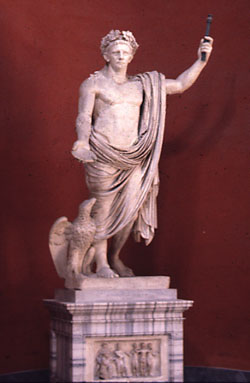